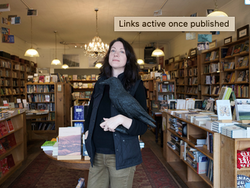 ​When Helen Macdonald released her bestselling debut book, H is for Hawk, in 2014, she quickly became known as one of today's most vivid nature writers—not to mention a literary celebrity in the birding world. The intimate memoir was about Macdonald's journey to train a Northern Goshawk, an especially difficult hunting bird, while mourning the death of her father. ​Six years later, in the midst of this year’s pandemic and a summer teeming with climate-related catastrophes and social unrest, Macdonald came out with her second book, Vesper Flights. It is a collection of lyrical essays (some brand-new, others previously published) with a wide-ranging scope. Birds are present in this book, of course: sparrows, swifts, gulls, hawks. But Macdonald also writes about boars, ants, fungi, deer, and those deeply human concerns of how our ways of being in nature will shape the planet—and us—in the years to come.
Audubon recently caught up with Macdonald by Zoom to discuss Vesper Flights, birding during lockdown, and what keeps her hopeful.

Audubon: How has this year been for you?
Macdonald: It’s a really strange one, isn’t it? I’m living in this house in an idyllic, tiny, rural village in the east of England, in the county of Suffolk. Outside my window there’s a barn, and a field that’s just been plowed after the harvest. Everything’s really lovely, yet everything is going wrong.
But there are moments of joy. Friends, walks, birds, it’s all there. I want to be really honest, though, because people keep saying to me, "Oh, you must be going out into the green world and getting solace." There’s been a lot of that, but there’s also been a lot of action movies and ice cream.

A: What are your birding routines right now?
M: I have been surprised—there have been incredible birds that appeared in Britain over the time of lockdown. There was a Bearded Vulture, for example; it shouldn’t be in this country, but it’s living very happily up in the north of England. People have been breaking lockdown to go see birds. I think it’s testament to how much of a pull they are. I always thought the draw of birds is that they represent life in this kind of perfect way: There is something so gloriously vital about them. I completely understand why you would do that, but at the same time I’m like, "Guys! Guys, don’t do this! Come on!"
All my birding here has been really local. I’ve been watching the migrants come and go, the swifts have already left. I have House Martins nesting in artificial nests around my house. It feels a little bit like I share my house with them. If I go outside at night, I can hear them talking to one another in the nests. And I just find this, I think, way more emotional and moving than I would normally, the sense of the common birds in my garden being part of my home. That’s become more important than searching out birds in the wild.

A: Why is that?
M: If you go birding and you see something, and you lift your binoculars to your eyes, you can watch a bird behaving. You can see it foraging, or pruning, interacting with another bird. But with the birds in my garden, I’ve gotten to know individual birds and flocks. I’ve watched them rear chicks and molt, and seen little squabbles amongst my House Sparrow flocks. And the English robins with the red breasts—people love them, but they’re horrendous creatures. They’re really violent, and all they do is sing and fight. I’ve watched this baby robin, this thing of extreme cuteness, develop its red chest and suddenly become a complete bastard! It’s kind of a soap opera.

A: Are you still doing any falconry?
M: No, I haven’t done any falconry for a long time. And the main reason for that is it’s a huge responsibility to have that partnership with a bird that is not domesticated. I’d been traveling a lot for the book, I didn't have the time to take that responsibility. Maybe in a few years I might think about getting back into it.

A: How is Vesper Flights different from H is for Hawk? How is it similar?
​M: There’s a lot of personal memoir in Vesper Flights, but it hasn’t got that narrative arc of a period of my life. It’s not a memoir. I had been writing a lot of pieces for various places. But also I began to realize, “I can’t write another book like H is for Hawk. That’s not possible. I would like to try something different.” It was also that difficult second album syndrome—like, "how do you follow that?" And I think the answer is with something different, though of course, many of the themes in Vesper Flights are exactly the same as in H is for Hawk.
There's a lot of attention paid to the way that we think of nature as a place free of politics and class and social meaning, but the secret of nature is that it's full of those things for us. We just pretend it isn't.
There's a lot of talk—urgent talk, I think—about the notion of home. Migration corridors, belonging and not belonging. One of the things that the natural world does extremely efficiently, and frighteningly, is provide a sense of belonging but also, it can be exclusionary for many.
Also, how is it possible to maintain any form of agency or hope in the face of what is going on? No, it's very, very easy to despair, and I think of a lot of nature writing now as bearing witness. We have to bear witness to what we have lost and what we are losing, because we have to mourn it. And if we don't mourn it, we can't move to a space where we can do something, we can act.
​
A: After H is for Hawk, a lot of people turned to your writing as a way to process both personal and planetary grief. Is that something that you're aware of, or something that informs your work?
​M: I don't think I write for that. I just try and unearth what I see happening around me. But as I said ages ago—I think I stole it from a Scandinavian TV drama—grief is love with nowhere to go. It's a really old saying, and I think it absolutely nails it. Grief is an emotion that we are not encouraged to talk about, and you see all these people sort of frightened of it. It's contagious. But we need that contagion right now. We need to feel grief.
One of the things I talk about Vesper Flights is this sense of the apocalypse, which I think all of us are feeling right now. We have the fires, we have catastrophic ice melts, we have permafrost opening up, we've got methane appearing and reefs dying. The way we think about the apocalypse, generally, is quite disempowering. It makes you want to just curl up and cry. It's like there's nothing you can do, you just have to wait for the end.
But the older meaning of the word "apocalypse" means "the revelation of things that have been there, but you haven't seen before," and I think that's the the version of apocalypse that I want to kind of wave around. It's like, "Look, you're just seeing this. This is happening now. Now we have to get together and fight, really fight, for this.