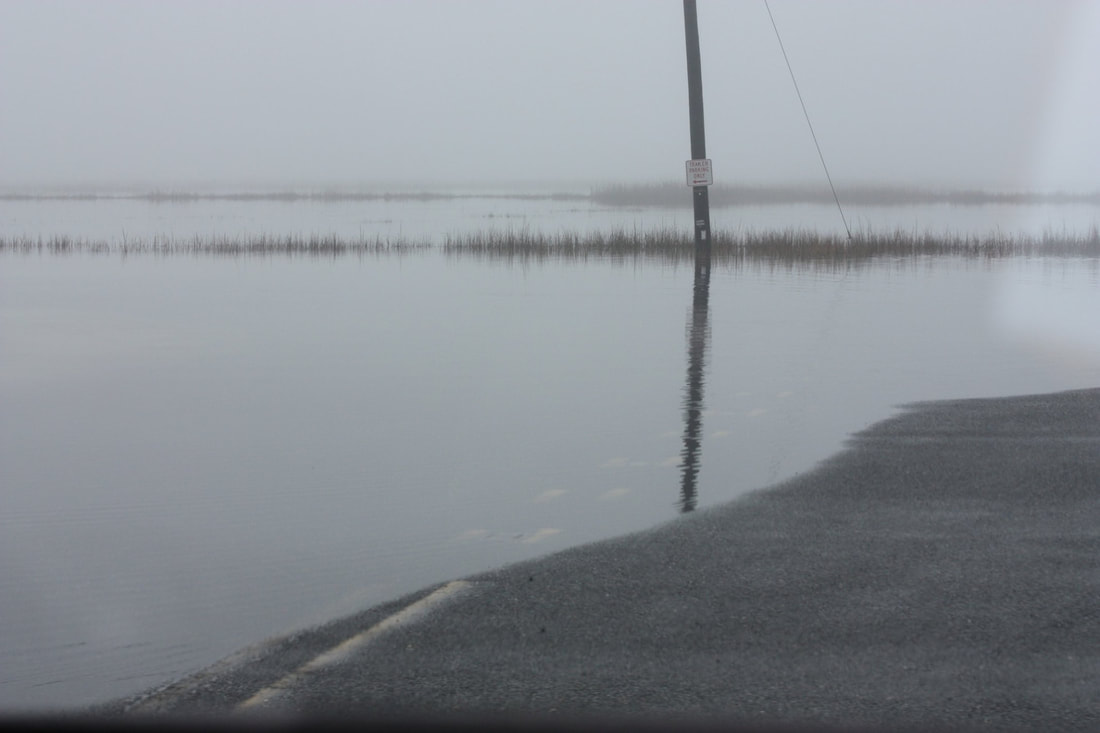 Kris Arcuri, Marian Jordan, Jan Dalheim Beauvais, and Robin Riley-Wright, participated in the Oceanville Christmas Bird Count on Saturday, December 14. Our count sector was in Absecon, NJ and covered the White Horse Pike from the Galloway border heading east to the bridge that separates Absecon from Atlantic City. We also covered the rest of Absecon north to the Forsythe Refuge border. We started the morning with fresh fruit, warm quiche and hot coffee at Kris' house (very conveniently located right in the middle of our sector) so we had fuel to head out into the dense fog and flooded roads. The temperature was 51 degrees, much warmer than other count years, but the drizzle was cold and non-stop and the previous days of rain along with the high tide blocked a lot of the roads and parking lots that ended at the bay. There were a lot of K-turns and backing up involved in this count!
One of the oddities of this count was a Great Blue Heron. Due to the dense fog we couldn't actually see the heron itself, but we could see it's reflection in the bay. We counted the "upside down" heron in the water figuring there must have been a real one in there somewhere.
A rather depressing part of this count included what I consider to be one of the most beautiful ducks....a Hooded Merganser. Unfortunately, this single duck was swimming in a small retention pond off the Home Depot parking lot that was loaded with trash, including styrofoam cups, insulation, plastic jugs and more. One duck and 50+ pieces of garbage. It was disgusting and made us all sad.
Highlights included Wild Turkeys, including a white smoke phase turkey. Our most common bird was the European Starling (567). Brant came in second at 475. On the lesser end we counted 1 Brown Headed Cowbird, 1 Brown Thrasher and 1 Hermit Thrush. We missed the Peregrine Falcon that hangs out on the drive-in movie screen but did see 2 Sharp-Shinned and 2 Red Tailed Hawks to make up for it.
We went back to Kris' house in the middle of the count for lunch and a bathroom break, and then back again at the end of the day to combine Marian's e-bird list with my (robin) hand-written back-up list over a dinner of yummy and very warming barley soup and wine. Thank you Kris for breakfast, lunch and dinner! You sure know how to spoil your counters.
Here's our official 2019 count list:
Oceanville CBC - Absecon sector
Count week species: Total 7
2 American Wiodcock, 2 Brown Creeper, 1 Golden-crowned Kinglet, 1 Gray Catbird, 1 Fox Soarrow, 20 Red-winged Blackbird, 1 Bald Eagle.
Weather: dense fog most of the day, 53°, little to no wind, several roads were flooded with extreme high tides.

Wow! What a great field trip we had November 30 to the Cape May area. We logged 4 eBird lists for a total of 52 species. Several of us realized more than one Life-Bird. After meeting in Somers Point, we converged at the Hawk Watch platform at the Cape May Bird Observatory​ for the last day of hawk counting for this season. We added a Nashville Warbler, several great looks of it flitting through the shrubs around the platform. Guess I should have taken a photo of the list, always impressive. A walk on the Blue Trail to the two near pond observation decks were rewarded with so many ducks, more American Widgeons together than I have ever seen plus many Gadwall, Green-winged Teal, Northern Shovelers, Northern Pintail, Ringneck, Ruddy and American Coots (coots, coots;). Raptors were all around, most of the time we had difficulty with ID because we were all looking at a different bird. We also saw several impressive kettles of vultures with hawks around the edges. While at the pond, we had the great fortune to have Josh Gant text us with a nearby rare bird siting. This solidified our tentative change of plans and we headed over to Beach Plum Farm​ to find a reported Mountain Bluebird, even more exciting as we had two Bluebird monitors with us. There were two among the local Eastern Bluebirds enjoying the freshly plowed field. We had many good looks as they all rested in clear view between forays to and from the worm/bug store. Almost as exciting were great views of loads of Eastern Meadowlarks foraging in the fields - so many - so close. We visited the piggys and walked the perimeter adding an Eastern Phoebe for our effort. Excited and famished we stopped in to the Barn for hot coffee and delicious, freshly made chicken orzo soup. The place was hopping from the time we arrived having to make a second loop to find a parking place in the auxiliary lot. If it had been the last stop, we might have taken advantage of relaxing by the outdoor campfire but we headed out for a quick stop at the CMBO store then on to the Cape May Meadows. Pretty quiet but a single Rusty Blackbird and a fleeting siting of a Sora in flight crossing a creek, diving into the reeds on the other side and out of sight. If you haven't been to the meadows in a while (like me) come down to check out the fabulous new bird blind that is as big as a subway car! eBird Checklist Summary for: Nov 30, 2019 at 8:11 AM to Nov 30, 2019 at 7:00 PM 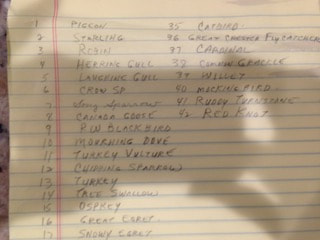 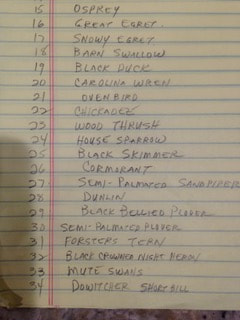 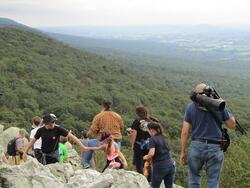 Lester Block's notes on the trip to Hawk Mountain (ABOVE IMAGE AND BELOW TWO SHOTS): (Sept 2018)...We traveled to Hawk Mountain near Kempton, Pennsylvania yesterday for an Audubon society field trip. We had an excellent trip. The weather was fantastic. Five of us started at the South Lookout where we met Jesse Amesbury, one of the official hawk counters. He is a Cape May, NJ native and an Audubon member. It was his day off. We were happy he met with us and shared his company and expertise. We hiked to the North Lookout and were rewarded with some fine views. It wasn't long before we saw a few birds migrating down the ridge. It was slow for most of the morning. When it started to get a little sunny, we witnessed a spectacle of hundreds of Broad-winged Hawks flying by. (The official count of Broad-winged Hawks for yesterday was 1054!) Nature in her magnificence. We saw a lot of other raptors throughout the day. Here is what we saw: Black Vultures; Turkey Vultures; Osprey; Bald Eagles; Northern Harrier; Sharp-shinned Hawks; Coopers Hawks; Red-shouldered Hawk; Red-tailed Hawks; Broad-winged Hawks; Kestrels; Merlin; Peregrine Falcon; several large flocks of Cedar Waxwings; Black-capped Chickadees; Red-breasted Nuthatch; Black-throated Green Warbler; Blackpoll Warbler; White-eyed Vireo; Flicker; Ruby-throated Hummingbird; several good looks at Ravens; one Rock Dove; a lot of Monarch Butterflies; a five-lined skink and, the highlight of the day...sharing the rocks with us......2 Timber Rattlesnakes! Afterwards, several us stopped for dinner at The Inn of Orwigsburg on the way home. Great day birding and having fun with friends and family. (Thanks to Mark Lucas and Angela Horne for sharing some of their photos for this post.) 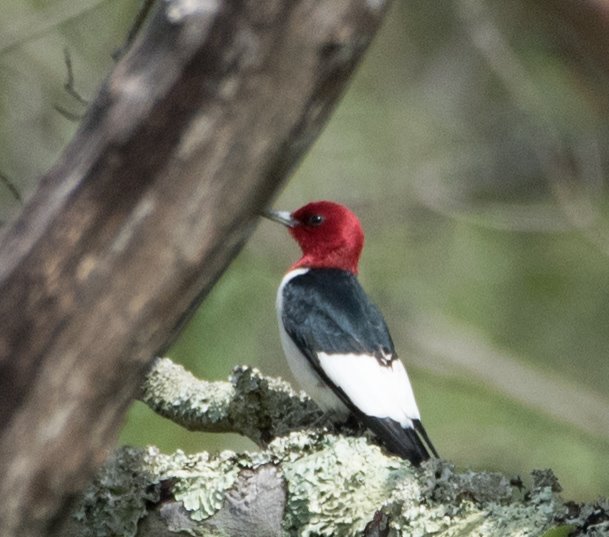 See what you missed? A red-headed woodpecker and one of the Friday morning walks at Forsythe. "We had a red-headed woodpecker on this morning's Bird Walk at Forsythe this morning (Friday walk run by the Refuge). It was in the dead trees on the left of Gull Pond Road just after you pass the entrance to Wildlife Drive". — with Marian Jordan and Jan Dalheim Beauvais. Photo by Kyle Chelius? 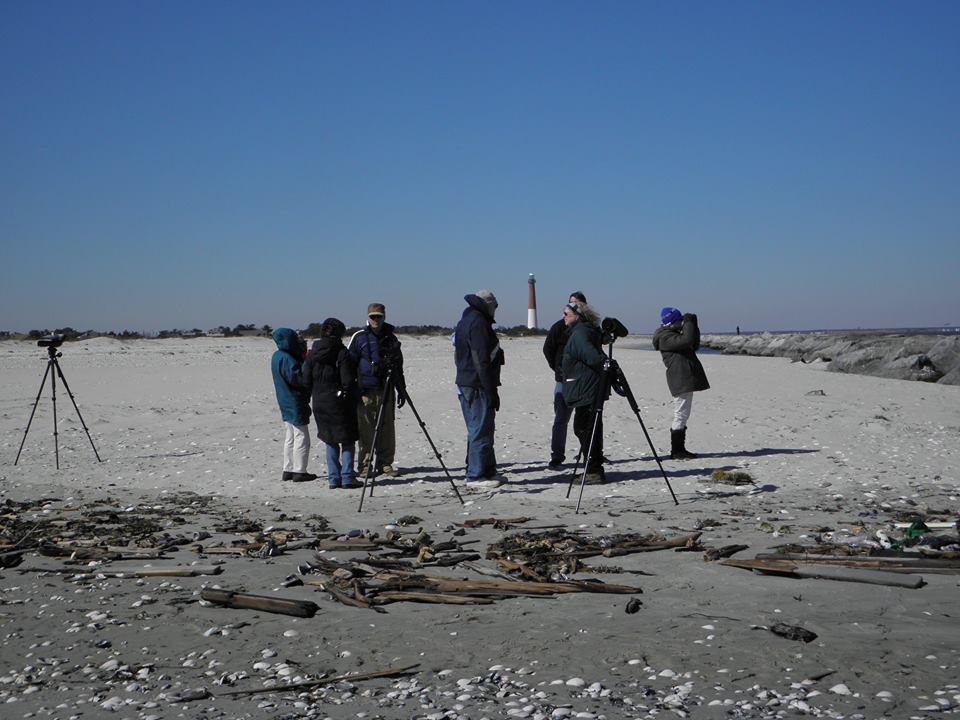 Cape May Field Trip---Below
This was a multi-stop trip attended by Jan Beauvais and Marian Jordan. The weather was terrific, sunny, calm breezes and about 55º. A short stop at the Cape May Hawk Watch, the pond was quiet but we had some face-time with a barred owl: Mute Swans, Double-crested Cormorant, Sharp-shinned Hawk, Red-tailed Hawk, Barred Owl and American Goldfinch.

The feature of the day was a Seabird Workshop by staff from the Cape May Bird Observatory (See below for images of Avalon with Cape May Staff and the new shelter). Two more friends met us there to hear a great presentation about how to identify flocks of seabirds flying both near and far from the shore. We saw: large flocks of scoters too far to ID as one of the three species - but we learned what a distant flock looks like and how it behaves, Red-throated Loons, Northern Gannet, Double-crested Cormorant, Sanderling, Herring Gulls, Great Black-backed Gulls.

The scheduled trip being over, Jan went home and I mosied up Ocean Drive since I had never done that. Most of the tolls were either closed for the season or free heading north. I ended up at Corson’s Inlet State Park, another place I had never been. All in all, a great day of discovery. 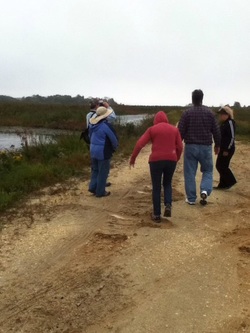 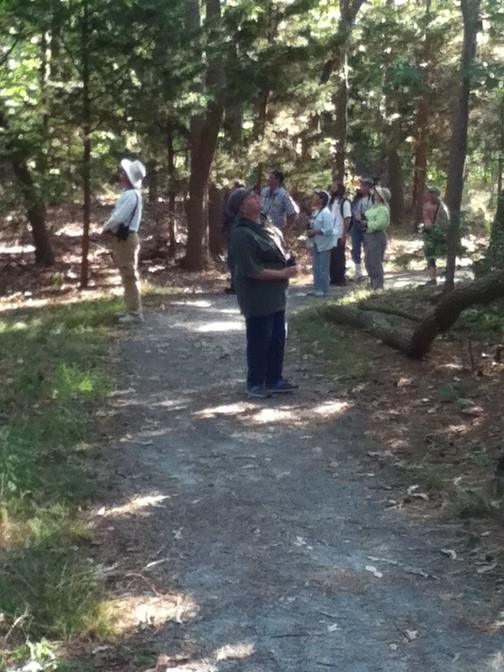 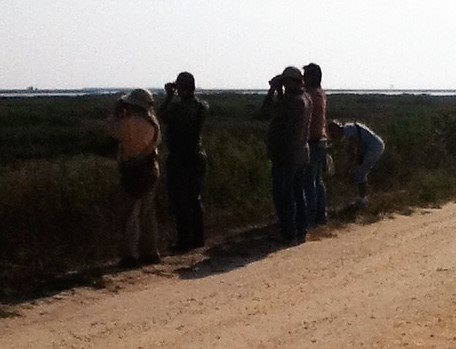 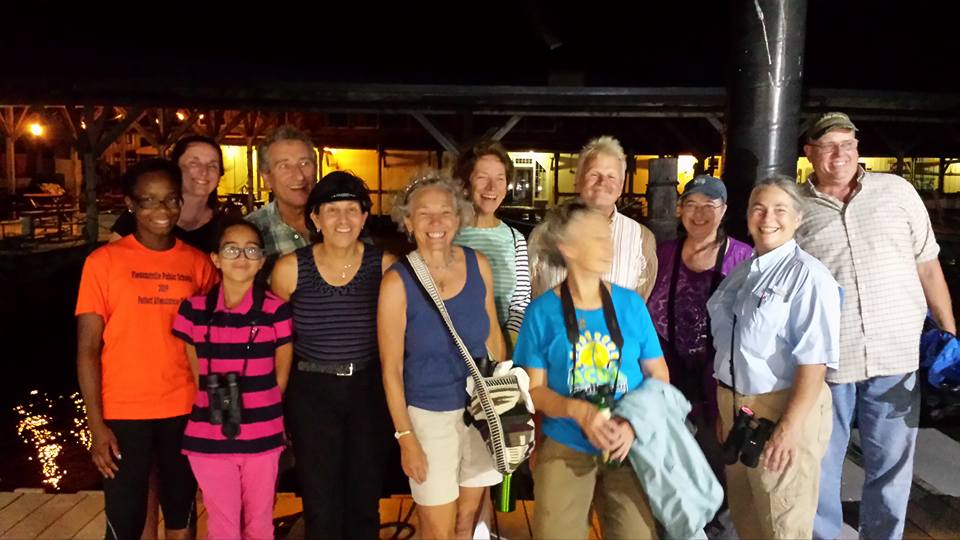 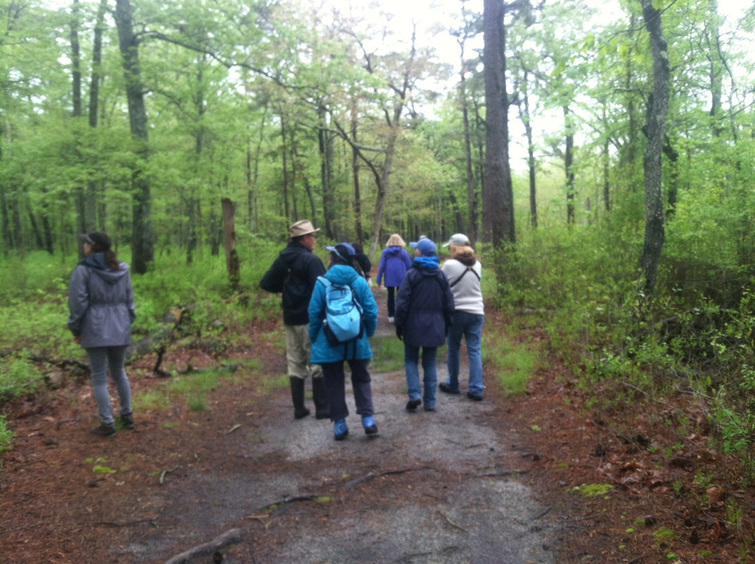 There were a few of us here for this moist (but not rainy) day at Estell Manor. Diane, Dave, Lisa, Wendy, Maryann, Jan, Alice, Pete, Debbie and Jim.....

Not sure of the total bird count  but some of the better species found were: Swainson's Warbler (seen by 4 of us),  Yellow-throated Warbler, Pine Warbler, Prothonotary Warbler, Blackpoll Warbler, Worm-eating Warbler, Yellow Warbler, Northern Parula, Cedar Waxwings, Blue-gray Gnatcatcher, Great-crested Flycatcher, Eastern Wood Peewee, Arcadian Flycatcher, White Eye Vireo, Yellow-billed Cuckoo and Chipping Sparrow....to name a few. Lots of the usual but being that we are in May Migration, .....it was fun to see the Warblers.

The day was moist....a light mist to start out with in the 50's....and then the clouds took over and we have 'harsh backlight' to view our subjects. But between us all, we found quite a bit. We started at 8am....and worked our way back to the cars near noon. A great Field Trip and the last one that Diane has planned for us as she and Jim are moving back west.... 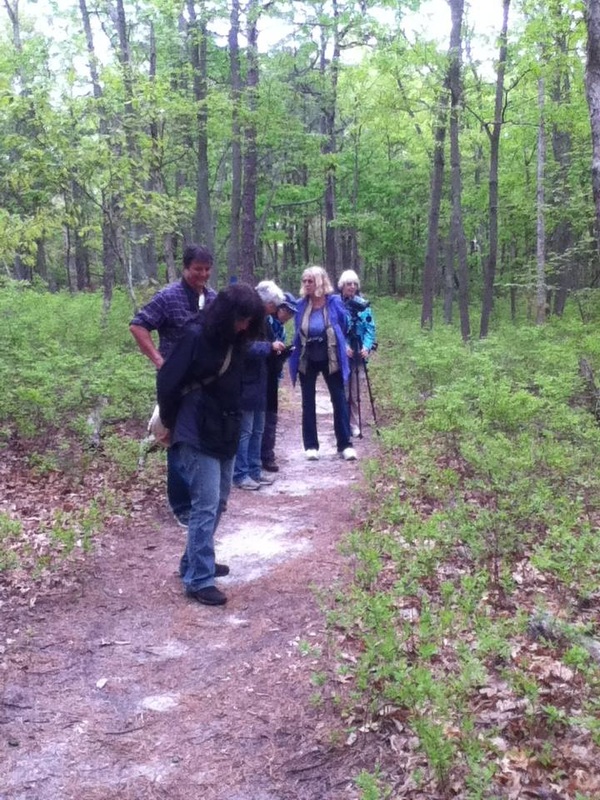